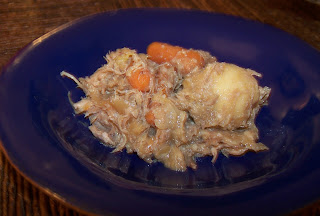 Here's another Oldie But Goodie (OBG) for you.

I originally had this a few years ago when my boss made it for a church luncheon. I fell in love immediately! She's from New Jersey, so I thought it may be a Northern thing, since I had never had anything like it before...but she said it has Dutch origins and is prepared on New Year's Day for good luck.

Don't let the sauerkraut put you off. It blankets the pork, making it oh-so-tender. It's not an overwhelming flavor, but it's definitely the star of this dish, giving it that "something special." Just adds a little zip/tang.

Place pork in a large crockpot. Top with sauerkraut, gravy, and vegetables. Cook on low for 8 hours. Shred pork with two forks. Stir in dry gravy until completely mixed in.